Firstly the VMX club would like to acknowledge the invite from the Classic Club for us to join in the fun at Darkan…much appreciated…also to all the hard work done by the Classic Club on the track..

Saturday evening camping was fun as many times before.. the “usual suspects” kept all well entertained…though as I understand there were some sore heads Sunday morning…

Sunday was bright and early.. Sign on had some 85 riders.. of which 25 were VMX members. Great job to all those who made their way there.

Good to see a couple of vintage stalwarts (bikes..not people) in Hayes Forsyth and Asry Bizar out for a ride.. Asry has been busy expanding the brood and brought the kids along too.. well done..

Another worthy mention goes to Stan Reid.. been a  while since we’ve seen you Stan and Veronica.. great job..

The class set aside for us to ride was “pre 80” of which the majority of bikes were pre 75.. so all good. Conditions really suited our machinery, particularly early in the day.. was lots of fun.

A real eye opener for the rest of the Classic guys was Sarah and Rob cutting some laps on the sidecar.. Interesting to see the number of people up against the fence taking videos/pictures of them going around.. You could see the expression on the spectators faces. WTF..??!!

Everyone went home happy and in one piece…great days riding..

Keep an eye out for Deb Miller’s exceptional photography wfofotos.com or facebook –  Wicked Photo Outlet.. Thanks Deb. Click here to be taken directly to the photo gallery

For all VMXWA members who would like to attend the invite meeting promoted by the Classic MXWA Club here is the recent information taken from their Facebook page. Sign on is at 7.30 with riders briefing at 8.30, riding to commence approximately 9. Instructions on how to locate the track are available here. 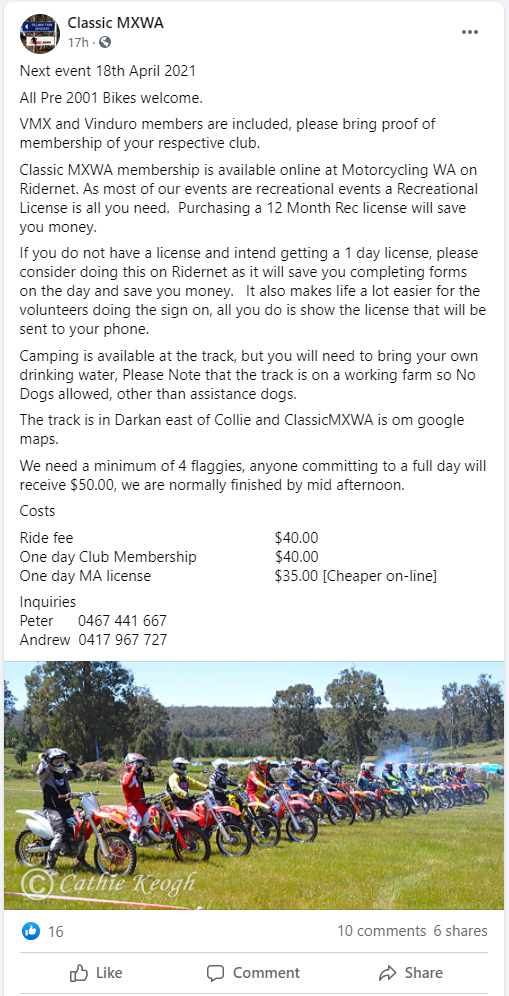 The VMX Club of WA had its first club event of the year at Stockton Park, Collie, home ground of the Collie Motorcycle Club.

Firstly thanks to the Collie Club for allowing us the use of the venue, all the work that Mitch Corry put in prior to our arrival and the use of the Club rooms, showers and toilets

The track was prepped to perfection, with the sprinkler watering system in force Saturday afternoon ensuring dust free riding on Sunday. Thanks also to longtime VMX supporter Steven Melvin for coming out to the track on Saturday arvo moving sprinklers around…much appreciated.

As a steady flow of eager members arrived Saturday arvo, it was great to catch up with faces that I haven’t seen since last year. Evening brought around a chorus of laughter and merriment from the campers as adult beverages were consumed and stories of past glories were embellished.

Sunday dawned with a picture perfect scene across Lake Stockton with the sun rising and the lake shrouded in mist..

Sign on accomplished thanks to the effort of Michael Gordon and then it was on to the dulcet tones of Andrew Irving for Clerk of the Course duties at the riders meeting.

23 riders signed up for the first meeting of the year, not too shabby, considering the stories that were circulating about bikes that were still in several stages of reassembly.

Practice underway, with the ever alert Bill Watson on flags allowing many and varied versions of practice..

Great to see some faces that have been absent for a while..Vic James arrived with 2 bikes..good to see you Vic.

My heros of the day were Jason  Cook and Luke Varnavides who climbed aboard the ex Andrew Irving sidecar and put in may laps….the laugher could be clearly heard all around the circuit..welcome aboard guys..

Plenty of Jones and Latham brothers in the pits great to see you guys too..

The twin shock feature was dominated by Ralph Miller..thanks to the guys that came and showed their support for the twin shock class..something that was strongly supported in the survey that was sent around.

Look at Debra Miller’s web site for plenty of pics of the days riding..Wicked Foto Outlet.. wfofotos.com or look for Wicked Photo Outlook on Facebook. Click here to be taken direct to the photos from the weekend.

I also would like to wholeheartedly thank the guys that gave up their ride day to come along so the rest of us could enjoy ourselves, the flaggies. Roger Parham, Nick Maxfield, Trevor Rivers and Michael Gordon, thanks again.

Don’t forget, next event is the VMX Club invite to the Classic Club at Darkan, 18 April 2021 hope to see you all there…. Look for the ads on FB and our website.

There is also a Clerk of the Course training being conducted at Darkan on the Saturday arvo prior, come along.. make sure you have done the L1 Officials online learning beforehand.